Fall hath fallen in Russia. A bit early for my taste but I’m thankful for a break from the heat. One day it was the heat of summer and the next, a cool breeze swept through the city bringing autumn with it. Outfits of young (and not-so-young) Russian women have transformed from open-weave tops, micro-mini skirts and platform stilettos to slightly more opaque tops, skinny jeans and platform stilettos. Babushkas are carting buckets of apples instead of berries. The smell of burning wood occasionally overtakes the smell of diesel. College students are returning and the Christian Orthodox are celebrating the autumn harvest. Soon I will be leaving my fair city for Kiev to apply for another visa. I excited to see Ukraine but nervous about the visa process. I realize it’s been a long time since I posted and I have so much to share it’s rather overwhelming. Alas, I’m off to photograph another Tatar family but hopefully tomorrow will bring a more detailed update.

The Temple of the Holy Miracle Workers of Yaroslavl is situated just outside Kazan’s center. It is the only church in Kazan that remained open during the Soviet period- all other churches were either destroyed or repurposed for Soviet causes. All of the icons and relics of Kazan were brought to this church to be safeguarded. Sermons had to be pre-approved by the State. During this time, it was largely the Babushkas (grandmothers) that kept the spirit of the church alive. And to this day, Babushkas tend to the needs of the church.

A few other things you will notice while traveling on Russian busses:

My Russian textbook, written first during Soviet times, has an exercise where you write sentences asking about objects on a table. An example from today’s lesson was this:

Notes From the Banya

The Russian banya is an ancient ritual of steam bathing. Modern banyas generally wooden structures built in the backyard that house the sauna and 1-2 other rooms for dressing and lounging. You undress, step into the sauna, throw some water on the wood-burning stove and let the steaming commence. What follows is a mix of relaxation and torture. Part of the ritual involves lying face down on a bench and having another person beat you with dried birch leaves. Gets out the toxins! Once your skin has turned a beautiful shade of red, they douse you with pan full of freezing cold water. Beat, rinse and repeat. When you need to take a break from the intense heat, you can slip in to the lounge area where there is usually a bed or benches to lie on. Once the beatings have concluded you can start the bathing process. Lather up a scrubber, which has the texture of medium-grade sandpaper, and set about removing your epidermis. Scour, rinse and repeat. When all is said and done, you dress, go back to the house and celebrate your detoxified and de-fleeced state with a hot cup of tea.

As much as I love the banya ritual, after a long day of walking and sweating in 95-degree heat, it is almost impossible to imagine going for a steam. But the secret to enjoying the banya in the summer, as I was told, is to think about how great it will be once your banya is over and you step out into the yard where it’s cool. It’s the experience of cooling off in the night air that makes the suffering of the sweat and steam worth it. It’s a rather Buddhist concept- you can’t know one without knowing the other. I used to say that the only redeeming quality of winter was coming in from the freezing cold and warming up; that the process of getting warm was so enjoyable that it almost made up for the pain of being cold. And it’s true; coming out of the banya into to cool air is euphoric.

Yes, banya can be done at any time. In the summer? Well, ok. In the winter? Yes please. During a wedding? Huh? During Elza and Iskander’s wedding we had a brief intermission between events where we all were back at Iskander’s family’s house. It was a sweltering hot day. As soon as we get to the house, Zilya grabs me and says “Banya!” But wait, what? Banya? Now? I’m ok, thanks. She insists. She hurries me into the banya and soon some aunts or cousins join us (all female of course). The next thing I know there’s six of us in the banya in the midst of a wedding celebration. Banya: anytime, anywhere.

I am deeply fascinated by people’s everyday realities. I often find myself looking at a person’s house or apartment and wonder who they are, how they live, what they’ve experienced. When I travel abroad, these curiosities intensify. There’s the experience of the larger differences- culture, values, religion, food, leisure- and as a photographer it is these aspects I am usually focusing on, but I am equally fascinated by the everyday objects. They are the small, functional things that make up our everyday experience to which little consideration is often given (that is, of course, putting aside the billion dollar industry of design aesthetic-and truth be told, I’m a sucker for good design and packaging). I like the look of objects and the experience of holding and using them. I revel in the mundane.

With that, I thought I’d jump on the Hipster…I mean Hipstamatic bandwagon with objects I encounter every day in my apartment

The Russian adverb тяжело (pronounced tee-dje-lo) means heavy or difficult. It is used to describe that which is hard to bear or wrought with obstacles. There is another word in Russian for difficult which is трудно (pronounced trood-na). Russians often describe life as тяжело (heavy) and not трудно (difficult). When I first heard this statement, I didn’t make the connection. I understood тяжело to mean heavy as in physically heavy, not as difficult. It struck me that Russians use a synonym for heavy as a way to describe life. When I think of it in the literal, physical sense of the word it makes sense to me on another level. There is a certain weight to life in Russia. Life feels somehow more physically heavy.  The trollybus that rolls down my street is like a tank on wheels that rattles the foundation of the apartment building where I live and creates a mini earthquake every 10 minutes. Heavy carpets hang as decoration on the walls of many Russian homes. The old Soviet apartment buildings are cement and brick behemouths that could probably withstand an F5 tornado. Everything here feels solid and immovable, rooted into the earth- earth that is ironically lacking in rootedness as many Russian cities are built over ever shifting swampland. 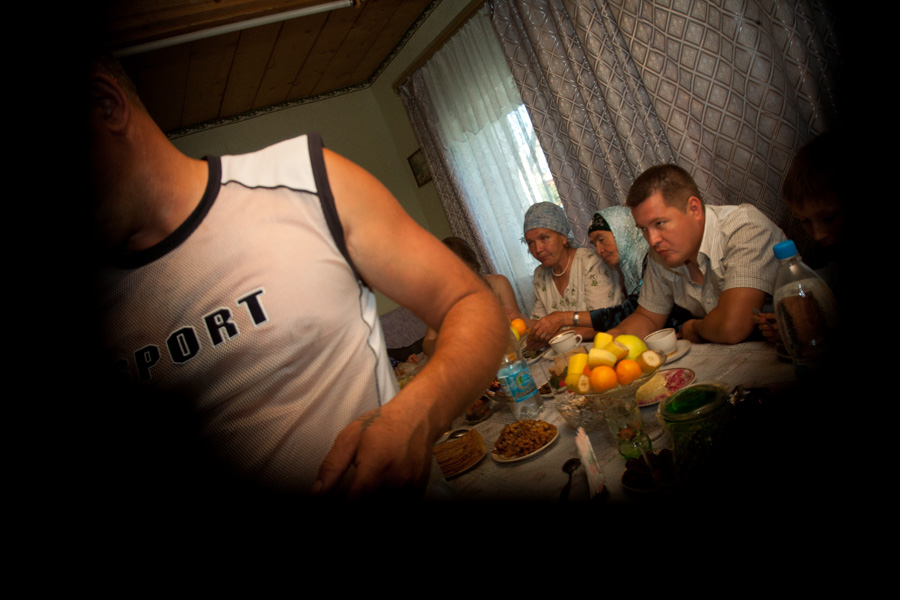 This was the last image my camera took before it stopped working. I’m not lamenting; I actually like the image.

Today I walked around the Old Tatar Settlement. It is a very old part of the city  where most of the buildings lay in ruins, which is quite different from the ever expanding, glitzy center. Although the neighborhoods are now a mixture of Tatars and Russian, the Tatar Sloboda was once the only part of the city where Tatars were allowed to live.

“Это твоя судьба.” It is your fate.

This sentence was said to me by the father of the groom whose wedding I was shooting when my camera broke. One week into my stay in Russia and my camera broke. It was an upsetting event all around. I had travelled all this way to photograph life in Kazan and I had no camera. What does a photographer do without a camera? How would I get it fixed in the middle of Russia? How do I tell this family how sorry I am that they won’t have any photos of the wedding party? The family took it quite well and was more concerned about my unhappiness than the prospect of an incomplete photo album. It is my fate. These words were actually quite comforting in the moment. Religious or not, fate is a belief held by many Russians I have met. I, unfortunately, do not have such a strong belief. For me, profound worry and stress would follow but in that moment nothing could have comforted me more. If I am to be cynical, I could think that a belief in fate is a way to accept injustices and mediocrity in life. I could see it a way to be complacent. But the beauty of believing in fate is that it actually frees you from worry. It frees you from feeling that you have to figure everything out on your own. I truly want to believe that everything happens for a reason and perhaps Russia is the perfect place to start doing just that.

P.S. Apparently what happened to my camera, the mirror fell out, is a known issue in the Canon 5D (the old one). So my camera is being fixed for free. And I now have a rental.

My first few weeks in Russia have been a whirlwind. I was first in Moscow for what was supposed to be two days but ended up being three due to an iPhone time zone mishap. I did some light sightseeing: Red Square, Moscow State University and Tolstoy’s grand Moscow home. I also wanted to go to Gogol’s last residence in the city but ran out of time. There are so many grand museums to see in Moscow but I rather enjoy the home tours. I like to imagine how the great Russian writers lived in their time, however grand or tragic. It’s a perspective you don’t get in a regular museum.

On the third evening in Russia, I did manage to get myself on a train heading to Kazan. Riding the Russian trains is as romantic as it sounds. I decided to spring for a bed in “Kupe” which is considered second class. There are four berths to a compartment. My roommates were a woman and her four-year-old son, and two men, one of whom was rather drunk but harmless. These compartments become their own little universe for the duration of the trip. The inhabitants are like a makeshift family; eating, chatting, sleeping, drinking tea, watching the landscape whizz by. I was running late for the train and didn’t have time to go to the store for food so I had to buy whatever was available in the train station. Needless to say, it wasn’t pretty. My cabinmates absolutely refused to allow me to eat the mysterious fried bread products that I purchased. So they fed me what they had: bread and cheese, apples, oranges, and chocolates. I was grateful.

I lived at first on the far outskirts of the city with a Tatar family. In researching my project I met a young woman named Elza. She invited me to stay with her and her mom and I ended up staying almost two weeks with them. As a guest, I was treated to my first real taste of the Russian hospitality that I experienced during my first trip in 1999. I have been to many countries all over the world and have never been treated with such genuine regard. Russian hospitality is not for want of money, status, gratitude, bravado or anything of the sort. It comes from a level of humanity deep within the soul. It is a part of daily life here. I see it as a guest in someone’s home and I see it in everyday interactions between people on the street. This is a topic I will explore in greater depths in the upcoming months and it is an important aspect to understanding the Russian experience.